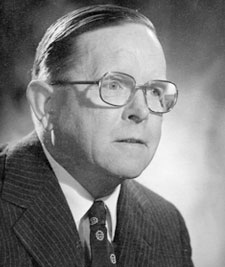 Educated at Bury Grammar School, his leaning towards the sciences was recognized early by his teachers and he was encouraged to study medicine.

In 1929 Charnley entered medical school at the Victoria University of Manchester and qualified with MB CHB in 1935 having, in the process, obtained a BSc in anatomy and physiology and gathered a number of prizes. A year later he became a Fellow of the Royal College of Surgeons, England, at the youngest age acceptable to the college (25yr).

In May 1940 Charnley volunteered for army service, entering the Royal Army Medical Corps as a lieutenant, then promoted to Major. The posting included Northern Ireland, the Middle East and the evacuation of Dunkirk.

In 1947, whilst working in the Manchester Royal Infirmary, Charnley was appointed visiting orthopaedic surgeon to Park Hospital, Davyhulme, and in 1949 to Wrightington Hospital, near Wigan.

In 1958 Charnley decided to put his efforts into the development of hip replacement research and surgery, and in 1962 he moved his clinical practice to Wrightington Hospital.

Charnley's contributions to orthopaedic sciences and surgery are so vast that it would be difficult to do justice when attempting to present more than a mere outline. Three aspects form a main theme: trauma, fusion of joints by compression methods and total hip arthroplasty.

The Closed Treatment of Common Fractures, first published in 1950, went to three editions and three reprints, the third one 40yr after the volume was first published! Justice will not be done by attempting even to summarize the volume, which has become, as intended by Charnley, the vade mecum of a practising trauma surgeon. Charnley's objective is clearly stated in the preface to the first edition: "an attempt is here made to re-emphasise the non-operative method, and to show that far from being a crude and uncertain art, the manipulative treatment of fractures can be resolved into something of a science."

Yet Charnley was not slow to admit that certain fractures, as of the tibia, proved difficult and had to be treated by internal fixation.

In 1961 Charnley wrote: "There is a tendency to imagine that serious research nowadays can only come out of a laboratory, and the contributions from the pure act of thinking on clinical facts ended with the great clinicians of the past. In the training of young surgeons - the attempt to foster the habit of making clinical observations and questioning accepted beliefs ought to start from the earliest moment."

Published in 1953, Compression Arthrodesis is a monumental work on the physiology, principles and practice of cancellous bone union under compression. 'A few observations on the human body are often of more value than a large series of experiments on animals. It has rightly been said that every surgical operation is a biological experiment'. Although not as popular a method of treatment as it used to be before the advent of total joint arthroplasty, the principles remain valid and are almost certainly the basis of formation of the Association for the Study of Osteosynthesis, the Arbeitsgemeinschaft fur osteosynthesefragen Group with their very detailed description of operative treatment and compression fixation of fractures.

Few individuals are capable of changing their practice by advocating diametrically opposite views and remain successful. Charnley did just that? from arthrodesis to arthroplasty from abolition of all movement to restoring all of it.

From 1962 onwards, Charnley committed his energies to hip replacement surgery with a full-time practice at Wrightington Hospital. It is probably correct to suggest that the active mind had at long last found the answer that had been the holy grail of the man whose dedication to his patients was achievement of pain relief while maintaining movement of the hip and mobility of the patient. On 26 March 1959 Charnley delivered a lecture to the East Denbigh and Flint division of the British Medical Association where his views on 'Surgery of the hip joint' are clearly expressed: "In a speciality as vast as that of orthopaedics, surgeons yearn for an easy hip operation, or, if a good operation is difficult, they hope that having mastered its performance through trial and tribulation it should be universally applicable. The only type of operation that could ever be universal would be an arthroplasty because this is the reconstruction of a normal joint. This type of surgery demands training in mechanical techniques which, though elementary in practical engineering, are as yet unknown in the training of a surgeon."

Charnley himself did suffer 'trial and tribulations' when developing his hip replacement, but he never gave up and finally in November 1962 the Charnley hip replacement became practical reality and has become the gold standard for this form of treatment. Clinical and radiographic success of this procedure is now approaching 40yr of follow-up.

Total dedication to all aspects demanded by this type of surgery consumed Charnley's time. Development of the clean air enclosure, total body exhaust suits and the instrument tray system are the essential aspects to reduce deep infection in this type of surgery. Prospective documentation, the establishment of a Centre for Hip Surgery and the collection of numerous post-mortem specimens bequeathed by his patients in order to study the histology of the bone-cement interface, show clearly how far seeing Charnley's ideas were. His enthusiasm and dedication remained unchanged and he never really retired, life and his work ended together - he died in harness.

Charnley's contribution to orthopaedic surgery was recognized both nationally and internationally with numerous awards, including a knighthood in 1977. Lady Charnley continues his work, first by ensuring the completion of the bone-cement interface study.